We've got another profile for you today, it's John Miers. John has created a fantastic comic for us which allows you to programme a robot, allowing it to navigate a maze. This is no easy task but is certainly great fun. John's work is based on the science of John Hedley. 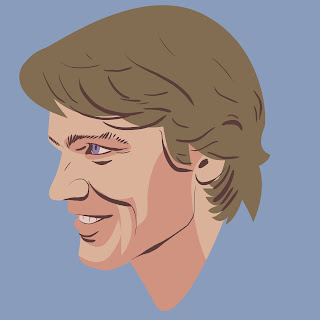 Who are you?
John Miers

What have you done / what are you doing?
I'm a cartoonist, teacher, and researcher, currently working on a practice-based PhD exploring the use of metaphor in comics. I've done a lot of work in the UK indie / underground comics scene, and illustration for books and magazines. One of my favourite recent projects was collaborating with some of Britain's best cartoonists on a billboard-sized comic for Foyles bookstore, which is still on display outside their flagship store on Charing Cross Road, London. I'm frothing with excitement about my work being used in an upcoming book about comics from Tate publishing, the first survey of the artform they have ever conducted.

What excites you about comics?
How long have you got? They're a unique artform that combines the immediacy of imagery with the specificity and detail of writing. Comics can present the reader with fantastic worlds and sprawling, epic narratives, while retaining the intimacy of handwriting. What's really exciting about being involved in comics right now is the explosion in the styles and subject matter being used by cartoonists, and the different uses to which comics are being put. The Newcastle Science Comic is a great example of this!

What excites you about science?
I can't help but be attracted by the mind-bending theories proposed to explain some of the more outlandish phenomena that have been observed in the recent history of science, such as the use of parallel universes as an interpretation of quantum mechanics, or the idea derived from the study of black holes that we might all be living in a hologram. More generally, the scientific method, rooted in scepticism and evidence-based knowledge, is one of the greatest gifts to thought humanity has ever given itself.