Graham is the creative force behind Exceptional Man, working with scientist Karolina Rygiel and his regular colourist Jim Cameron. 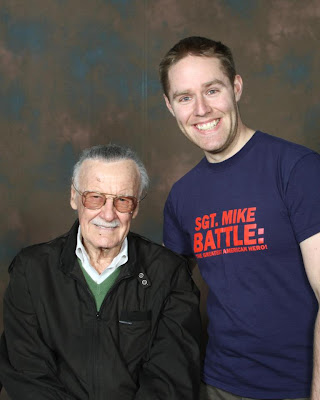 Who are you?
I'm Graham Pearce, a boy from Cornwall who now lives in the North West and draws comics in his spare time. I've won an episode of The Weakest Link, I've never been drunk and once stood next to Stan Lee for 2 seconds (but keep showing the photo to make people think we're great mates).

What have you done / what are you doing?
I've spent the last 12 years writing, drawing and publishing the satirical action comic SGT MIKE BATTLE: THE GREATEST AMERICAN HERO! I've got dozens more ideas in development and am currently creating a new comic called SWOOPER HEROES with my 6 year old niece.

What excites you about comics?
Comics are so versatile and it's a medium which allows you to create characters and worlds with nothing more than a sheet of paper and a pencil!

What excites you about science?
Science fascinates me more as I get older as I realise how little I understand about it.