Oscillating Brow once created (drew and photocopied) a comic so popular that it kept selling out at a local pop-up shop. He found this quite troubling and protested at length whenever he received the profits. Oscillating Brow is in it for the comics. He wants to draw them and share them. O.B. has contributed a comic demonstrating a brilliant grasp on Astoundishing Science and all it's implications. This was lettered and coloured by Paul Thompson. The two had so much fun working together they teamed up again to make one of our puzzles. 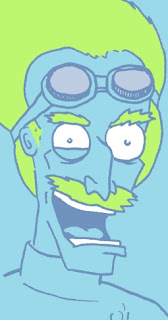 Who are you?
Oscillating Brow

What have you done / what are you doing?
I draw daft comics because it's fun. I even print my own small comics occasionally. I've been a member of the Paper Jam Comics Collective since the very start and have done a story in each of the PJCC anthologies. You can read some comics I drew (mostly at Paper Jam meetings) here. Occasionally I write reviews and articles about comics for the Newcastle City Library graphic novel reading group 'Readers of the Lost Art' (see here).

What excites you about comics?
Drawing silly stuff, ideally with shouting and gurning (but preferably not involving backgrounds or perspective or any of that nonsense). The great thing about comics is that anyone can do it. Pick up a rudimentary drawing implement, find a bit of paper, draw a sequence of pictures - BOOM! If you haven't drawn a comic recently, have a go. Right now. Stop reading this. Stop it. Go on, do it now. ... Fine have it your way, but I'm tutting at you.

What excites you about science?
Anything amazing and it's all amazing. We take so much for granted but if you look objectively at life today, it's like magic. I think science is basically magic that someone somewhere can explain and has replicatably demonstrated beyond current reasonable doubt. It's pretty exciting that science is still happening, and at a faster rate than ever. Where will it end? (well, the heat-death of the universe, I guess, but that's got to be quite a way off).
Contact/Links
oscillatingbrow.blogspot.co.uk/