I'm Emily, a Greetings Card Designer and Illustrator based in Newcastle.

I had a particular fascination with invertebrate creatures growing up - even keeping some (like Stick Insects, Giant Snails and Jewel Beetles) as pets! I was excited to have the opportunity in 'Spineless' to combine both my interest in invertebrate creatures and my love of comics into something with an educational element.

My first comic follows Claude the Lobster as he is tagged and tracked by researchers. Scientists are still learning new things about Lobster behaviour and my comic was inspired by the possible adventures Claude could be having underwater.

My second comic is all about Mussel Byssus - a sticky glue-like substance Mussels use to stick to rocks which has potential surgical uses and was used to make fabric in the past. The story follows Zizi and her robot pal Pixel as they explore the underwater 'Musselopolis' and travel back in time in their Submarine Time Machine to learn about the uses of Byssus in ancient Egypt. 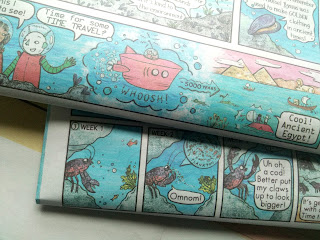 Top - this is the panel where Zizi and Pixel travel back in time to ancient Egypt to find out how Byssus was made into luxurious 'Sea Silk' material. After using a lot of blue for both comics, it was nice to shift the colour palette to warmer colours for the section where the characters explore Egypt, this panel shows that transition.

Bottom - Claude finds a rocky crevice to call his own and spends a few weeks relaxing there after a rather traumatic predator encounter! I like the expression of Claude as he's munching on Plankton in this panel. It was fun to try and characterise a lobster and create Claude's different expressions to get across his mood as the story progresses.